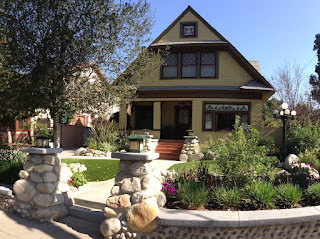 were home!  It was time to get Boone acquainted with his new home. There was one problem though (actually two). We had two other kitties at home and they were not eager to welcome a new family member. Our concern was magnified by his lack of fear and limited vision. We decided to keep him upstairs and separated from Joy & Zion. He had come a long ways in 8 days but he still had a respiratory infection, ear problems… 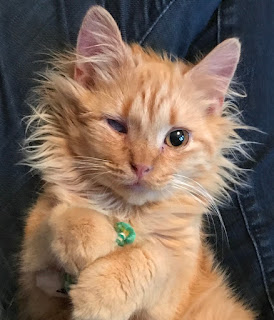 Once we got settled it was time for him to get a check-up with our veterinarian at TLC Animal Clinic and Hospital. We were eager to hear how he was recovering. To our relief no more respiratory infection, dehydration, ear mites and his foot had healed and good weight gain. He was still struggling with a yeast infection in both ears that required more medications!

He was becoming a healthy young male kitten (7 months old) and needed to be neutered. The vet recommended we have his blind eye removed at the same time. We had become accustom to Boone’s blind eye…but remove it?! The surgery would bring additional pain and trauma to his young life. When we first found Boone the eye was partially closed, weeping and irritated. We thought it looked pretty good now. She seemed to think it cause him irritation and asked us to give it some serious thought. 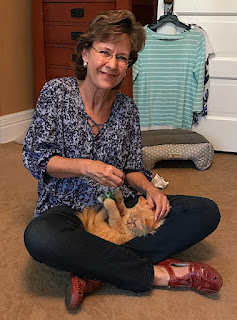 We returned to the clinic with Boone two weeks later. Mike and I remained firm in our decision DO NOT remove the eye!  While he was under anesthesia to be neutered they found an abscess on his chin that required a drain. He came home that evening groggy, confused, sore, with a drain in his chin…and two eyes.

All the while life was moving forward. I was going to my STUDIO each day, Mike was working in the yard or the garage. Boone loved to be around people. He was acting more and more like a healthy young kitten, full of energy and eager to play. His favorite game was fetch. We would toss paper balls and he would carry them back to us again and again and again. Every chance we got we’d go upstairs to visit, play, brush, feed…just to keep him company. He just wanted to be near us.

A couple weeks later I had a workshop in Santa Fe, New Mexico. Mike was going to join me for a few days so I got a sitter to watch over our home, water the yard, care for our kitties and wild birds in our backyard. Mike loves to feed birds of every kind: finches, sparrows, mourning doves, hummingbirds… We enjoyed a few days in Santa Fe checking out Canyon Road, restaurants and galleries… before long it was time for him to fly home and for me to get ready for my workshops.

During my two weeks in Santa Fe we would talk on the phone at the end of each day. I would tell him about my students, where we painted and sights. He would tell be about home, family and kitties. About a week into my trip Mike says to me, “At 2am it came to me…Boone needs a friend”.  I said, what?  I come to find out Mike woke up in the middle of the night thinking about Boone. So far, our hopes of getting the downstairs kitties and Boone together hadn’t materialized and now Mike was worried about Boone being lonely. So what did he do? He went to the TLC Animal Clinic and asked about the kittens that needed to be adopted. As it turned out they had a young male kitten the same age as Boone and in need of a home. Before the vet intervened he was slated to be euthanized. When they took him in he was 3 months old and feral. After living at the vets office for 4 months and being around people he was tame enough to be placed in a home. I asked, did you bring him home? Mike said, yes. I asked how’s it going? Mike said, he hasn’t come out from under the bed yet.

...Stay tuned for Part 5: A Friend for Boone

If you missed any of Boone's story you can read more here:
Part 1: Becoming Boone
Part 2: Bring Him Home
Part 3: The Long Road Home

Posted by Brenda Swenson at 1:03 PM

Email ThisBlogThis!Share to TwitterShare to FacebookShare to Pinterest
Labels: Boone 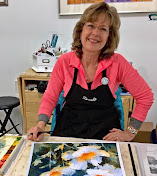